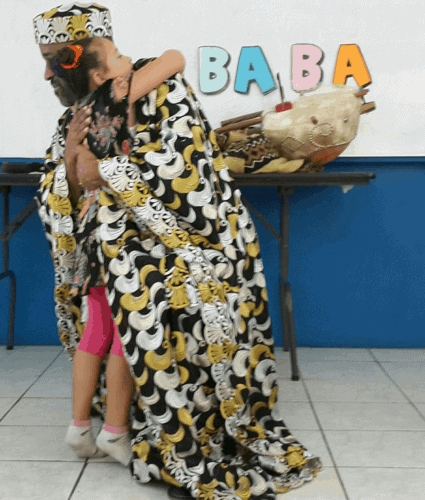 I’ve only been in Costa Rica for a few days but in that time I’ve performed for 10 different school audiences of varying ages.

There is a response that I’m finding common here amongst the people, both adult and children.

Each time I’ve finished a performance, instead of the students filing out, they rush the stage with their arms held out wide for a hug. When it first happened I was caught off guard. By about the 3rd time I started to realize that maybe this is how young people here show their appreciation.

Today I had an incident that forced me to sit down and write this out.

A young girl of about 4 or 5 ran to me following a session of storytelling for a group of children her age and attacked me with a hug. Within seconds I had throngs of children in line or nudging their way in for hugs. The little girl kept saying, “Thank you Baba, thank you so much Baba!”

I loved her enthusiasm.

After all of the children had finally filed out, about 20 minutes later, the young girl returned with her mother. She ran into the room ecstatic, “Baba I have something for you!”

Her mother stood to the rear and permitted her daughter to present me with the gift of all gifts, a packet of cookies.

I took the cookies with such enthusiasm that she became even more excited, literally jumping up and down.

Her mother stepped forward and chimed in. She explained that the night before, as she was preparing her daughter’s lunch for school that her daughter instructed her to prepare something also for Baba.

Keep in mind I had yet to even cross this child’s path. All she knew was that I was coming to her school and that she had seen me on the Internet, in pictures and maybe heard some audio.

She held her arms out open wide once again.

I knew she was expecting compensation for the cookies.

And so we hugged.