Sworn to Secrecy on the set of Blippi 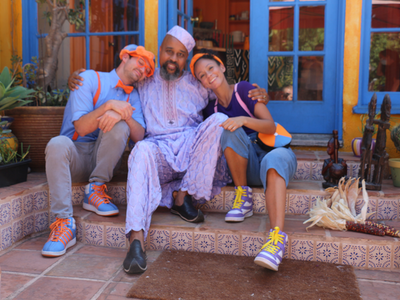 *Sworn to Secrecy on the set of Blippi
Finally! I’ve been holding on to this little piece of intel since I did the video shoot for Blippi and Moonbug Entertainment a few weeks ago and now I can finally blurt it out.
They are launching a new character on the show and her name is Meekah, played by the incredible young actress Kaitlin Becker who used to host the children’s show “Sunny Side Up” on PBS Kids.
I promised the crew that I would not publish these images until the date of Meekah’s launch. Today Is Meekah’s official launch day! The episode we shot together is going to air on November 27, 2021. I’ll keep everyone updated if there are any changes.
I couldn’t write fully about my experience because I needed to include both Stevin (Blippi) and Kaiitlin (Meekah) in detailing my experience on the set.
First, I’ve got to say that I think Stevin is an incredible visionary way beyond the character he created. There were times on set when I felt for him because I could see his mind keeping hundreds of plates spinning at once. With that being said, he still found the time to be supportive and encouraging. At one point, he even made sure to hold my book up so that it would appear in the episode. Now that’s someone who really gets it!
Kaitlin, I found to be highly skilled in her craft, meticulous, and very nurturing. Because I’m multilingual, sometimes I run into a wall with code-switching. I was needing to speak on each of the days of Kwanzaa using their names in Kiswahili. For some reason, my brain kept wanting to jump to Spanish (code switch over to Spanish). Kaitlin noticed my dilemma and called for a few subtle changes to the script, which helped me tremendously.
I could go on and on writing about my day on the set of Blippi & Meekah’s show but I’ll let the pictures speak their proverbial thousand words.
Thank you for taking the time to read this and accompanying me on this journey we call life.
Share This