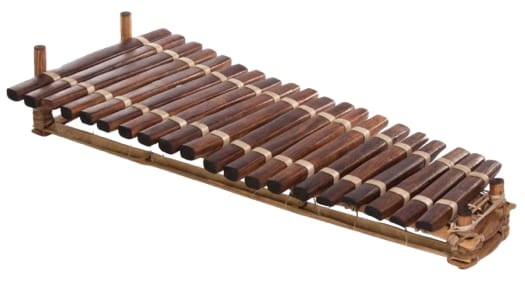 The balafon is one of the oldest instruments played by griots. It is commonly referred to in the West as a Xylophone. The Balafon is made of a series of wooden bars, or keys, resting on a bamboo frame. Beneath the wooden bars and under the frame, small gourds of varying dimensions are suspended that serve as resonators. The number of keys usually ranges from seventeen to twenty-two. Griots play this instrument either sitting on the ground or standing, with the aid of a cloth strap slung around the back and over one of the shoulders. The playing sticks are made of a hardwood with the striking ends wound in the rubber of a rubber tree or from strips of rubber from the inner tube of a tire.

The most widespread account of the origin of the Balafon is found in various versions of the Epic of Sundiata Keita, the legendary hero who united the West African Empire of Mali in the 13th Century. According to the epic, the enemy of Sundiata’s people, Soumaoro (Sumanguru) Kante, king of the Sosso, owned the original Balafon.

What is reputed to be this original Balafon, known as the Sosso Balla, is kept and guarded today by griots of the Kouyate lineage in the town of Niagassola, Guinea, West Africa.