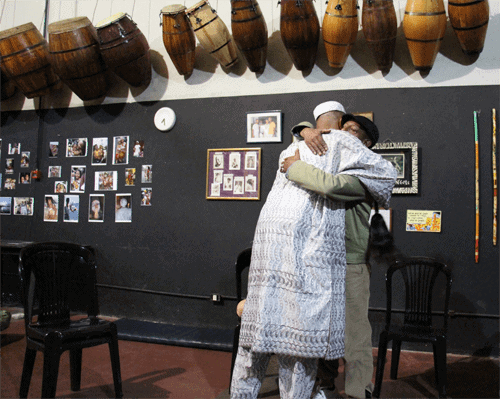 Today was another day of performing at schools trying to see as much of the city as I could from the windows of my taxi. My tour manager, Sofi, is astounding. She is really on top of her game. I have not wanted, nor needed, for anything.

I’ve been looking forward to today because, in the evening, I had made arrangemnts to visit Movimiento Afrocultural. It is a local cultural spot for Afro-Argentinian culture in the San Telmo area of Buenos Aires. The visit was arranged for me by a local friend of mine Yoli.

When we arrived there, the first person to greet me was a man of gentle but powerful bearing named Diego. I could tell right away from his eyes that his soul was steeped in the culture Candombe. The first thing he did was hug me, tightly and tell me that I needed to consider the cultural center my home. It felt good to be welcomed into the community so easily, so smoothly. Within a few seconds another brother named Fernando was hugging me.

A while later, I sat with the children and did a story in Spanish and a little music. Afterwards I had a chance to sit with the adults and talk a little about contemporary Afro-Argentinian Culture, history and issues of the day. I got to share with them what I thought were similar issues for their brothers/sisters in North America.

One of the brothers, Fernando, presented me with a humongous butternut squash. I made sure, after we sat in a circle and talked for a bit, to hug every single person present before I left.

To detail the experience would take a book. I was blessed by this moment in time and I hope that the people I crossed paths with at the Movimiento Afrocultural feel the same.

They really want me to return on Saturday but my schedule probably won’t permit it. I will take the singular blessing of having crossed paths with the few I did and savor the moment forever.