I’ve just ended the 1st week of a two-week tour here in Buenos Aires and I thought I would share some reflections.

When I first decided to accept the career as a storyteller, one of the goals I had was to honor my ancestors. A very simple way of doing this was to wear African attire when presenting before audiences. I wanted to acknowledge the past as having fed the present. I wanted to make sure that those who sacrificed and suffered in the past were not forgotten.

For the past 25 years, I have not presented in a single venue without being adorned with clothing from the Motherland. That was all true until a week ago. 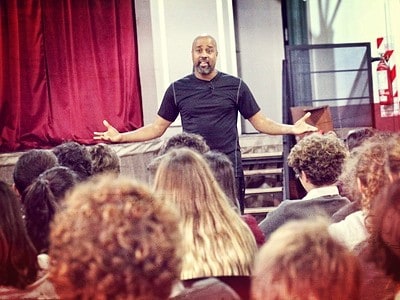 Beginning a tour in Buenos Aires, Argentina, I arrived, but my luggage did not. Inside of my bags were all of the beautiful brocaded fabrics and attire I’ve become accustomed to wearing when presenting to audiences.

Last Monday, the 25th of June, at 11:00 am, was my first scheduled performance for a group of high school students.

I was actually surprised at my level of agitation and anxiety. Not having the clothing, I typically wore, initially felt as though I was breaking a vow I had made my ancestors so many years ago. For hours the night before I was unsettled, feeling as though I lacked some form of cultural equilibrium.

Early in the morning as I lay awake, I began to hear the voices of wisdom that I have relied on in the past. The conversations I’ve had with so many people, the books I’ve read, the lectures I’ve attended and even the music I’ve listened to have all informed my being. Those voices came to me before my first performance here in Buenos Aires.

What was the prevailing theme of those ruminations?

The prevailing theme was that this was an opportunity for growth, both mentally and spiritually. I began to realize that the traditional clothing was no longer an imperative. I was in the throes of a right-of-passage. This was a test, a transition for me.

Thinking back over my life, I realized that I have always sought ways to honor the past and pay homage to those who suffered in order for me to have the platform to travel the world as I do today. I have always been acutely aware of the suffering of others. I have always held a profound respect for my ancestors.

That morning I decided that I would stand before the audience unapologetically. I made a conscious decision to make zero excuses for the way I was dressed or for not playing the music that I typically play. I would enter into the collective fully aware that the moment would define itself, that we all were gathered for a purpose.